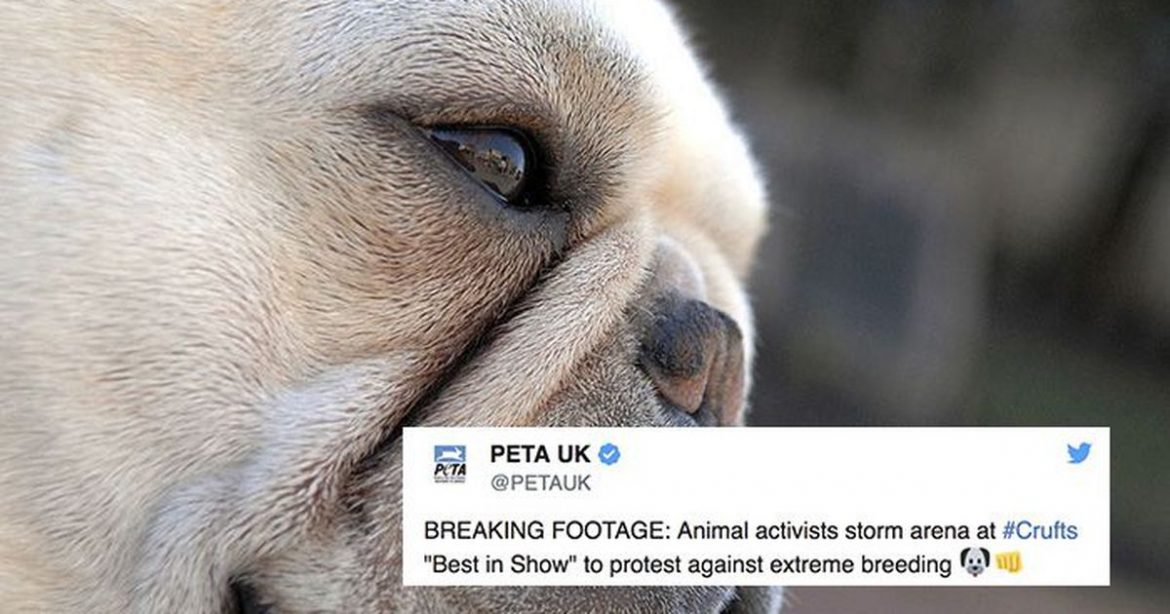 They were protesting the breeding of harmful characteristics, such as breathing problems for bulldogs.
Image: GETTY IMAGES / TOM WILLIAMS

Two protestors disrupted the Crufts final on Sunday with a pitch-invasion.

The protest began just as the Best in Show prize was being given to a whippet named Tease. Two activists ran onto the show floor, holding signs that read “Crufts: Canine Eugenics.” They were quickly wrestled to the ground by security.

In a press statement PETA claimed that the activists were in fact members of Vegan Strike Group, but the protest had been organised by PETA.

PETA said that Crufts glorifies extreme selective breeding, which “puts the animals at a high risk of suffering from a frightening array of painful diseases, birth defects, and congenital health conditions.”

They name as examples dachshunds (who often develop disc disease or other back problems), King Charles spaniels (who suffer from a condition called syringomyelia, which essentially means their skulls are too small for their brains), and dogs with “pushed-in” faces, i.e. bulldogs and pugs, which suffer from breathing difficulties.

“The culture of breeding also has wider implications for canine welfare,” said PETA, “Because breeders are churning out litter after litter of unhealthy pedigree puppies, thousands of healthy, adoptable dogs in animal shelters are denied their chance at a loving home.”

Crufts have recently stated that they’re clamping down on congenital health problems, but clearly PETA remains unsatisfied, as to an extent do other organisations. RSPCA dog welfare expert Lisa Hens said in a statement sent to Mashable:

“Some elements of Crufts are a positive celebration of man’s best friend and we enjoy seeing the dogs and their owners coming together to enjoy activities such as agility, flyball and heelwork to music.

However, the RSPCA does still have serious concerns about the main showing and judging at Crufts due to the way in which many breeds of dogs have been bred over the years to have exaggerated physical features in order to appeal to judges and best meet breed standards in the show ring. Shows like Crufts are fundamentally still beauty pageant-type shows and the way that dogs are bred in order to win these shows is still having a huge impact on their health and welfare.”

Crufts released the following statement about the protest.

Statement regarding incident at #Crufts 2018: pic.twitter.com/6tq7jI8cAP

No dogs were harmed.

WATCH: You can now unlock Super Mario inside of Google Maps