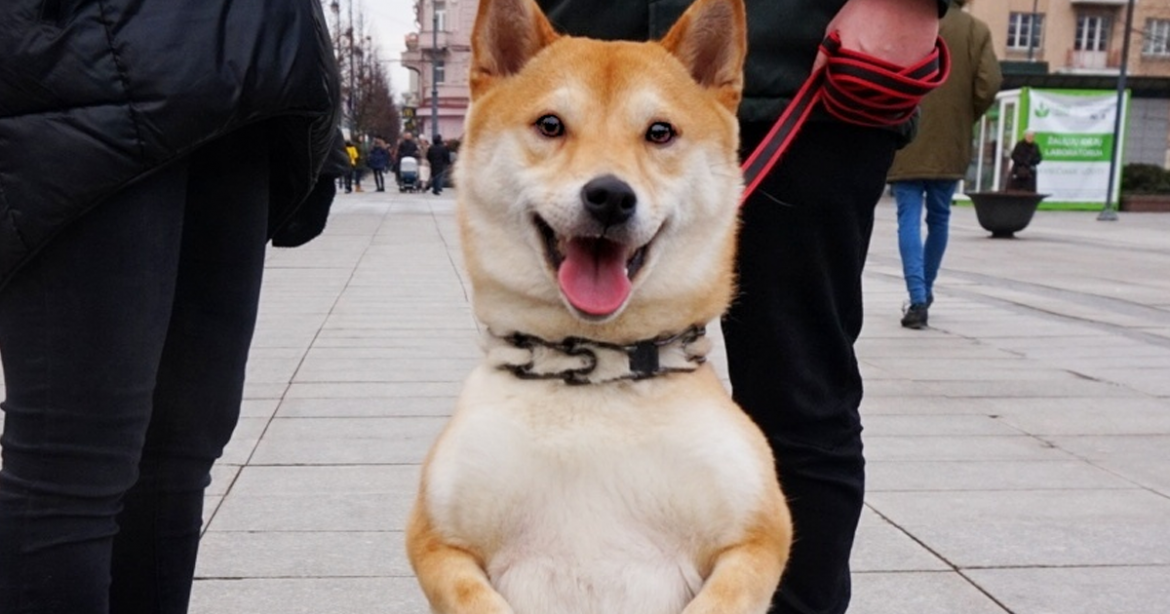 Hey there! We are @Dogs_of_Vilnius – a project by Gabija Kavaliauskaite and Karolis Jonusas – a couple running street photography blog of dogs. Every day we explore streets of Vilnius, the capital city of Lithuania, with an aim to bring you a one-to-one with the cutest and the fluffiest doggos we meet. As a country obsessed with canines, Lithuania has 1 dog for 3.9 humans ratio which translates to approximately 730 000 doggos in a small Baltic nation of just 3 million.

We began this project as a way of stepping further from our usual approach when encountering some passerby’s dog, normally just asking to pet it and then bid our farewell. However, now we don`t settle until there are at least a few dozen potential pictures…Rather often it takes more than just a treat to attract the attention of a doggo: some are more interested in toys, some require commands from their owner (unless it`s a Husky or a Labrador, both breeds appearing to be designed for photoshoots).

Having recently visited a major animal shelter “Lese” we plan on bringing the spotlight social media provides us with to other less fortunate four-legged friends and their temporary (often – permanent) homes. Join our quest to spread at least some of that unconditional love dogs offer by finding us both on Instagram and on Facebook as @Dogs_of_Vilnius.

And this is 8 m/o Cookie, a mixed breed that looks like a little white dachshund with a labrador face. Loves to eat away wallpapers.

Meet Fox, he`s a 5 y/o Corgi. He`s very friendly and would do anything for a treat – even betray his own family. 😀

This beautiful little creature is a 3 m/o labrador retriever named Barca. Because of her, her home needs constant renovation.

This is 4 m/o Samoyed puppy. Rylle is such a good boy that if a thief entered the house he would show him around.

This is a Shiba Inu named Shiba. Even though no one ever taught her how to walk on two legs, it’s her favourite activity.

“As well as people he loves other dogs and pigeons too!”

“She has ears like a bat. Never raises her voice.”

This is Zara, 1.5 y/o Belgian Shepherd. She loves to play with a ball and frisbee. On the day we took this photo Zara had her first trolleybus trip which was stressful due to many strangers onboard.

This is 2 y/o King Poodle named Natsu (“born in summer” in Japanese). Once Natsu didn’t like the design of a room, so he decided to show that by chewing away two pillows.

“She’s best friends with all the humans.”

She loves snow, therefore, she enjoys to stick her nose into it and keep it there until she starts coughing.

10y/o Borzoi/Russian Wolfhound. He doesn’t like both Pugs or techno music and is a sexist.”

“She still finds everything interesting and already managed to rip a few socks apart.”

He taught his owners how to not sit on the couch and play with a ball.

“Ever since not long ago when she became a mother, Ula has become calmer.”

“Grew up to be very obedient, but once, she chewed off a sofa and a pair of headphones.”

He’s super hyperactive and has some troubles concentrating outside.

“Sniegė is like a real hippy from the 60s. She loves everyone unconditionally and she would even love a thief who would try to break into her house and try to kill her. She’s a real Buddhist!”

“If you don’t hold her watching TV, she will start to cry.”

“Half a year ago, when the baby arrived in our family, Rendžiro felt very neglected. Now they are best friends.”

“She’s a true introvert and doesn’t require any attention.”

“He can’t focus well unless you have a snack.”

“Until the age of 2, she walked around with a muzzle even at home – she chewed everything, even the curtain ends. Even so, we never thought of giving her away, because she’s the cutest and calmest pup ever.”

“She waits for me the whole day to pick her after work at dog grooming salon.”

“Larger dogs are afraid to play with him because he is always trembling. And in turn, he’s afraid of other dogs, because due to differences in size, they tend to hurt each other while playing.”

“Since I play, she goes to every orchestra rehearsal. Knows martial arts. Each evening, she guards by the window.”

Tėja was born deaf. Both of them are affectionate, however, they fight like real sisters!

Read more: http://www.boredpanda.com/vilnius-dogs-photography-karolis-jonusas/
We Photograph Dogs Of Strangers On The Streets Of Lithuania The Country With The Most Canines In The EU (30 Pics) was last modified: April 5th, 2019 by PFC admin
#dogs #dogstory #humour #dogbook #busking#dogsofinstagram#dogsofvilnius#instadogs#photographycutedogsfull-pageKarolis JonuÅ¡aspets
0 comment
0
Facebook Twitter Google + Pinterest

Guy Wants To Get A Purebred Pug, His Friend Tries To Prove Why Its Animal Cruelty With Skull Comparison